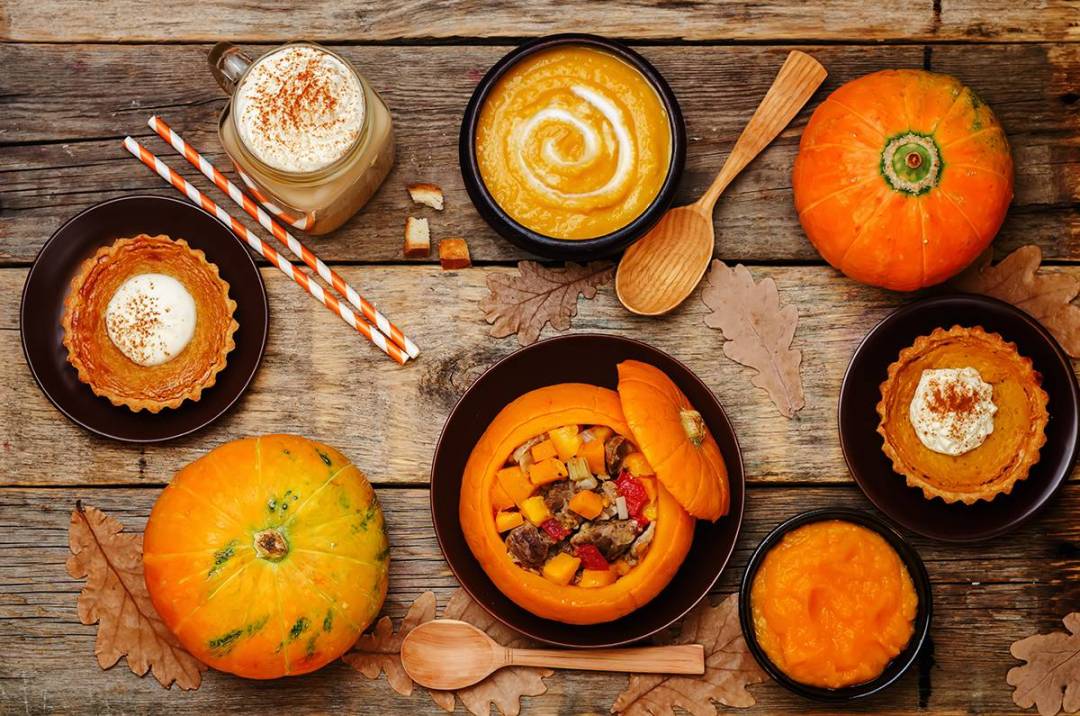 Pumpkins have been an integral part of the fall festivities for centuries. The giant fruit is as good for our health as it tastes. Unlike many other fruits, every part of the pumpkin is edible, including its skin and seeds. The fall-favorite fruit is capable of inhibiting premature aging and preventing a wide variety of diseases as it has Vitamin C, Fiber, Magnesium, Zinc and omega 3 in it.

Healthiest and delicious ways to eat pumpkin:
Pumpkin is a very versatile food. Besides using it to make delectable pies and creamy lattes, add steamed chunks to a variety of recipes like parfait, stew, soups, salads and smoothies.

By removing the inside of the pumpkin and separating the seeds from the excess matter. Take the seeds and place them on a lightly oiled baking sheet. Spread them out so they are not laying on top of each other. Next, lightly sprinkle coarse salt over them. Preheat oven to 175 degrees and place them on the middle rack. Cook for 20 minutes.

This is a healthier alternative to pumpkin pie.

Take full advantage of the season’s most popular squash with this nutritious pumpkin salad.

Nothing tastes better than freshly baked lasagna on a chilly fall day.

Preheat gas grill. Cut the pumpkin into half and scrape out its seeds and membrane. Peel each half and cut into slices. Whisk together olive oil, minced garlic and a pinch of salt. Add pumpkin slices and toss well to coat. Grill the slices over medium to slightly high heat for a few minutes, on each side. In a saucepan, mix vinegar, sugar and remaining garlic oil in the bowl. Cook it until the sugar is dissolved and the mixture is thick enough. Drizzle the sauce over the pumpkin. Garnish with mint and garlic.

A side dish calls for minimal preparation time especially when it’s of roasted pumpkin. Simply seasoned with parsley and olive oil, this recipe is high in fiber and low in calories.

Have some cubed pumpkin, sweet potato, chopped carrot, onion, parsley and salt and pepper to taste.
Preheat oven to 350 degrees. Place the vegetables in a baking dish and drizzle with olive oil, salt and pepper. Bake for 20-30 minutes, or until vegetables are tender. Garnish with parsley.

Preheat oven to 350 degrees. Soak lentils in water, then drain and rinse. In a saucepan, place lentils, rice, carrots, celery, mushrooms and vegetable stock, and bring to a boil. Cover it and simmer for approx 30 minutes until the water is absorbed. Pierce pumpkins and bake for 20 minutes. Then cut the lid off from each pumpkin and scoop out its seeds. Fill them with the lentil mixture, then bake for another 20 minutes or until lightly browned.

How to make pumpkin puree:

Take a four to six-pound bakeable pumpkin and slice it off the stem using a sharp, sturdy knife. Then cut the pumpkin in half length-wise and scoop out the seeds and attached strings with a metal spoon. Reserve seeds for roasting later on.

Preheat the oven to 400°F. Now sprinkle the pumpkin all over with salt and lay each of its half cut-side down on a baking sheet that’s lined with parchment paper. Roast it until a knife can easily be inserted into its flesh all over and the inside starts feeling soft, for about 35 to 45 minutes.

Allow pumpkin to sufficiently cool for at least one hour or so. Now use a large spoon to scrape the roasted flesh from the inside of the pumpkin, while leaving just the skin or shell behind.

Transfer roasted pumpkin flesh to the bowl of a food processor and process until smooth and creamy, about three to four minutes. Once finished, scoop the pumpkin puree into a food storage container and refrigerate immediately. If some water separation occurs after the puree sits in the fridge, drain it away before cooking with the puree.

5. How to eat pumpkin seeds:

Sprinkling them into salads, soups or cereals. Some people use pumpkin seeds for/to bake,  using it as an ingredient for sweet or savory bread and cakes.

Strange Halloween Facts You Must Know Before Celebration