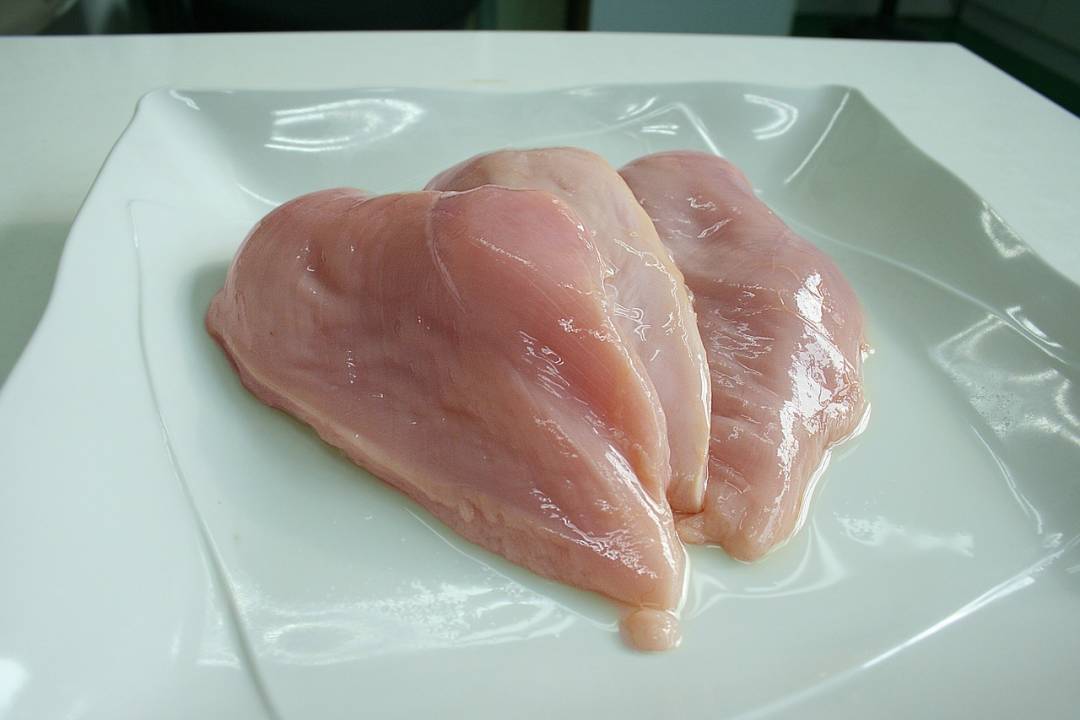 According to Compassion in World Farming, when you look at the raw chicken breast and see “white stripes on chicken” running through the meat, you know that the chicken was not raised in healthy conditions.

Many people around the world choose to eat chicken instead of red meat because it’s a leaner, healthier, alternative. However, that might not be entirely true if the chicken did not live a healthy life.

Recently they shared a YouTube video that they hope will inform the public about the dangers of eating the meat.

When chickens are genetically modified to grow faster and raised in factory-farms, they develop muscle tissue disorders. The two most frequently found disorders are “white striping” and “woody breast” and Compassion in World Farming is hoping to let more people know about this.

Poultry Hub says that woody breast is caused by poor muscle development and causes an abnormally stiff texture. When a chicken grows too big, too fast due to genetic modifications and hormones, it severely impacts the quality of the meat consumed by people.

Studies like this one that was published in the Italian Journal of Animal Science found that the white stripes on chicken were present in 96% of the 285 chickens they tested and that “the severity of white striping has increased in recent years.”

It goes on to say that the white stripes on chicken are a red flag to watch for that indicates that there’s an increase in the fat content and a decrease of protein content. This change is what dramatically affects the quality of the chicken breast meat.

Another study says: “the presence of white striping and wooden breast abnormalities impair not only breast meat appearance but also the quality of both raw and marinated meats mainly by reducing water holding/binding abilities.”

Normally, fat can be found going up the sides of a slice of chicken meat, but not straight through the center of it. Naturally lean chicken will not have any white stripes through it.

Compassion in World Farming said that these conditions can be avoided if the chickens weren’t genetically modified and had a better living environment with more space and natural light that encourages exercise and natural behaviors. They also say that the farms should be in “compliance with a meaningful third-party animal welfare certification and annual reporting.”

The National Chicken Council statement says: “Recently, the industry and consumers alike have become aware of a muscle abnormality in chicken meat (commonly known as “woody breast”) that causes breast muscle to be hard to the touch, often pale in color with poor quality texture. It affects a very small percentage of the chickens we raise but does not negatively impact them from a welfare standpoint. In addition, there are no food safety or health concerns for consumers because of this muscle condition.”

They finish their statement with: “Chicken companies have employees in processing plants looking at every piece of breast meat for any quality issue, in addition to USDA Food Safety and Inspection Service (FSIS) personnel that inspect chicken for issues that could impact food safety and wholesomeness.”

So, while the chicken may be safe to consume, its quality may be lacking if it has a tough texture and higher fat content. Some companies such as Whole Foods Market, Panera Bread, Starbucks, and Chipotle have already promised to purchase better chicken for their restaurants, and hopefully, more will follow suit.

What do our readers think about this information? Have you noticed a change in the quality of your chicken meat?  I think from now on I will start inspecting my chicken breast before purchasing it and if I see the white stripes, I’ll pick something else to make for dinner.